When a celebrity takes the stage, the audience roars, and magic happens. A special kind of synergy ignites between artist and fans. This is not just at live events; it also happens online when a digital catalyst brings artists and fans together in a different kind of venue. Yet unlike at a concert hall, anyone can participate in a digital experience, which means that the technology “stage” needs to be ready for massive scale.

AE Studio built such a catalyst. The interactive merchandise platform that they built enabled fans of a Grammy award winning artist to customize their own T-shirts. Thanks to Heroku's managed platform, reliability, and easy scalability, the site seamlessly handled a surge of millions of users over a two-day period --- all without a hitch. The flash event gave fans a fun new way to connect with their favorite artist.

At the intersection of app development, design, and data science

To help clients, like the one above, accomplish their goals, AE Studio relies on Heroku. Most projects, and nearly all greenfield projects, run on Heroku throughout their lifecycle, from exploration to production to client hand-off. Due to Heroku's ease of use and managed platform, AE Studio can avoid dedicating valuable resources to DevOps and focus squarely on helping clients get their disruptive ideas to market quickly. Many projects use the platform's integrated data services, like Heroku Postgres and Heroku Redis, as well as make extensive use of the Heroku Add-on ecosystem.

With Heroku, we can focus on what’s most important to our clients: building out their unique vision and helping them deliver maximum value to their customers. Greg Buckner, Partner & Technical Lead, AE Studio

Building the new frontier of customized merchandise on Heroku

The entertainment world inspires passionate fans who love to buy merchandise that reflects their favorite movies, musicians, sports teams, and the like. When it comes to buying a branded item, however, consumer choice is typically limited to color or a finite number of images. But what if consumers could customize the design itself? An innovative startup called Best Apps envisioned a platform that allowed users to manipulate images within parameters set by the brand. This would open up a whole new world of creativity for fans; everyone could own a highly personalized fan T-shirt or bag.

Best Apps hired AE Studio to build out that vision, and in 2019, their patented platform was launched — much of it running on Heroku. The Best Apps platform enables users to do things like rearrange characters in a lineup of superheroes, or upload a photo of themselves and place it next to a favorite celebrity. Once the user is happy with the design, the platform then manages direct-to-garment (DTG) fulfillment with printing and shipping partners. 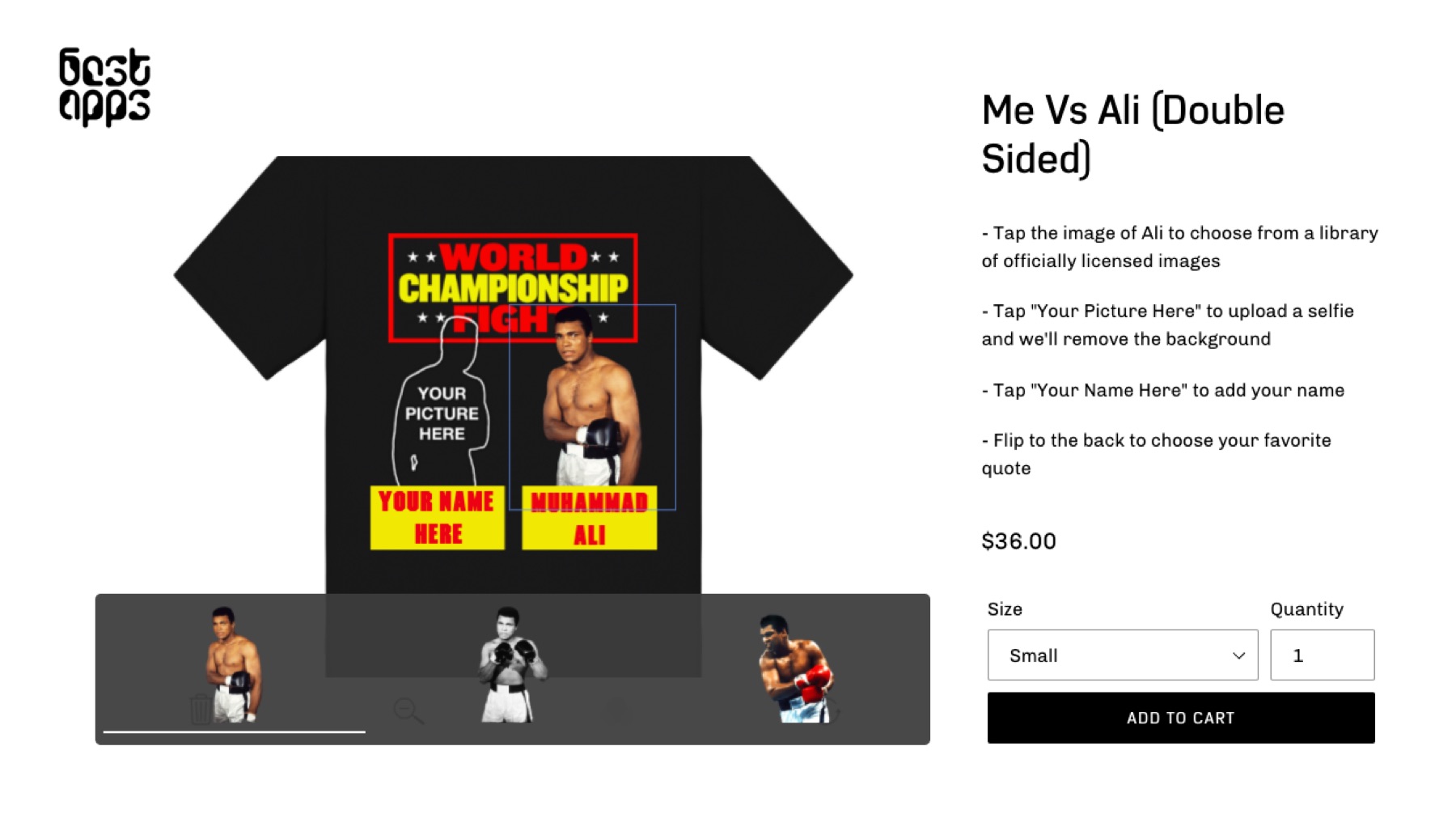 Fast forward later that year. The AE Studio team was working on new functionality for Best Apps when the rare call came in. A famous musical artist was releasing a new project and wanted to launch a customizable merchandise experience to go along with it. The artist’s team planned a major social media campaign to drive as much traffic as possible to the merchandise site. Could AE Studio take it on?

The project raised several tough challenges for AE Studio. This would be the first large scale deployment of a platform that had not yet been battle tested. The team had no idea if the site would get 10,000 visitors, 50,000, or hundreds of thousands. Adding to this, the client was a high profile celebrity and the flash event would run for only 48 hours, which meant there was no room for error. Last, but not least, the client needed to launch in only two weeks.

Due to their extensive experience with Heroku in previous projects, the team was confident in Heroku’s ability to handle massive scale. This project would prove them right.

We had no idea how sharp the traffic curve would be. Where Heroku really shines is that we didn’t have to worry about scalability, we could just focus on building the best product. Ed Chen, Partner & Head Data Scientist, AE Studio

The AE Studio team got straight to work building out the new merchandise site on Heroku. Thanks to Heroku's ease of use, the team was able to work quickly and stay productive, using built-in CI/CD tools, like Heroku Pipelines and Review Apps, that integrated well with the team's Circle CI workflow. The whole set up involved a constellation of apps running on Heroku, including the front-end web app, web server, job queue and order processing, print scheduling, and other services. The team also made extensive use of Heroku Add-ons to help speed up development.

Because Heroku is such a well thought-through, proven platform, we always found the tools and services we needed to build, deliver, and scale our applications. Adam Hanna, Software Developer, AE Studio

Monitoring and logging tools help prepare for the surge

As celebrity launches go, leaks happen, and the URL to the merch site appeared on Reddit a few days early. Suddenly, 50,000 people were trying to guess the password and log in. This gave the AE Studio team a head's up on the potential traffic to the site. The team conducted extensive load testing, starting with 10,000 requests per second on up to 100,000 requests. When errors came up, they were able to quickly go into the Heroku logs to troubleshoot issues and rerun tests using more powerful dynos. The Heroku Add-on Papertrail and Heroku Metrics were particularly useful during this process.

After an intense 48 hours, the site clocked 4.6 million page views, nearly a million unique visitors, thousands of orders, and even more in revenue. The site was a resounding success for both AE Studio, their client Best Apps, and their celebrity partner.

Throughout the event, the AE Studio team kept a close eye on application performance. Live launches can be fraught with difficulty, yet the AE Studio team had none of the typical issues during the site’s flash event. When traffic spiked, the team could scale up dynos in real time to handle increased load, and later scale them back down to stay cost effective. There was never a moment when people couldn’t access the site, submit orders, or use any other services despite the extra heavy demand. With tens of thousands of simultaneous users at any one time, the team’s careful testing paid off, peaking at their estimated maximum load.

Heroku allowed us to instantly scale and meet unpredictable demand in a high visibility celebrity application — all without dedicated DevOps. We wouldn’t have been able to do that otherwise. Greg Buckner, Partner & Technical Lead, AE Studio

Going forward, AE Studio will continue to function as the tech team for Best Apps’ products, along with serving the firm’s diverse clients. Thanks to the celebrity flash event, the Best Apps platform came through its trial by fire even more robust and ready for new high-profile opportunities.

Inside AE Studio on Heroku

The AE Studio team uses a wide variety of languages, frameworks, and data science methodologies across their client projects. For the celebrity website, the team built the front-end in Angular and the back-end in Node.js. All apps run on Heroku, except for the artwork rendering engine which runs on Linode. The site stores most data in Heroku Postgres and uses Heroku Redis for job queue and order processing. Images are stored on Amazon S3. The Heroku Add-on Papertrail was used heavily for this project.

Listen to the Code[ish] podcast featuring Adam Hanna and Melanie Plaza: The Blockchain, Beyond Cryptocurrency.

Founded in 2016, AE Studio is a team of designers, engineers, and data scientists that work with founders and executives to build products, scale teams, and teach Agile development. The firm is focused on increasing human agency through human-centered and sustainable product design, and helps clients to improve team productivity and drive business growth. AE Studio is based in Los Angeles, CA. For more information, visit: ae.studio.